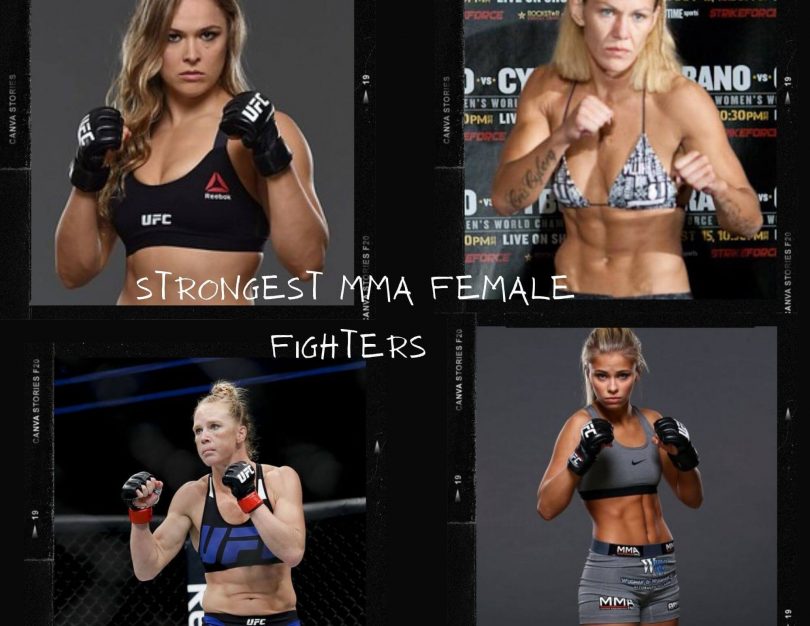 Who are the best MMA female fighters?

Mixed Martial Arts (MMA) is arguably the most violent sport in the world, a full combat sport that involves striking, grappling.

With no further ado, here’s a highlight of the top-17 greatest MMA female fighters we have selected and ranked, with considerations on the UFC and other MMA promotions.

Is Amanda Nunes the biggest female MMA (G.O.A.T.) fighter of all time?

Amanda Nunes of Brazil is the dominant name in the MMA scene. Currently signed in the UFC, Nunes is finally at the top of the list of the best mma female fighters of all time. Nunes is the current champion of the women’s bantamweight and featherweight divisions and also the first woman to have defended two division titles and also the first female win two division titles, she’s amazing. Nunes fought in 24 professional MMAs and won 20. She ranks 1st in the UFC women’s pound for pound rankings. 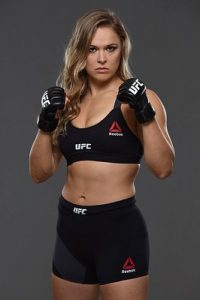 She is the first UFC Women’s Bantamweight champion and had won her first MMA fight in just 23 seconds. It’s amazing! She fought in 14 professional MMA fights and won 12, by mostly submission. Rousey holds the record for most female title defenses in the UFC and one of the first mma female fighters to be inducted into the UFC Hall of Fame. Ronda Rousey now presently fights for the wwe. 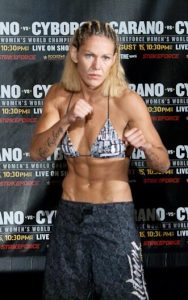 Signed for the Bellato MMA, she is the current champion of the Bellator Women’s Featherweight World Champion. She became a famous MMA fighter when she won the Strikeforce title defeating Gina Carano in the first round with a technical knockout. Justino successfully defended the title for two years after being tested for anabolic steroids. She was sent off the fighting cage for a year, and fined $ 2,500.

She is the only MMA striker to have won the World Championship title in four MMA promotions and one of the strongest mma female fighters. 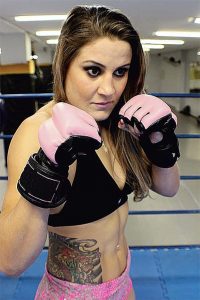 Jennifer Maia’s first four battles were unforgettable. She won by style, defeating his opponents in the first round, by mostly submission. That remarkable entry into MMA strengthened her presence in the sport. However, Vanessa Porto was first defeated in MMA in 2011. Six years later, she regained the invicta flyweight defeating Porto by a unanimous decision. Maia defended the title for the next two years. She is currently ranked 6th in the women’s UFC’s flyweight women ranking. 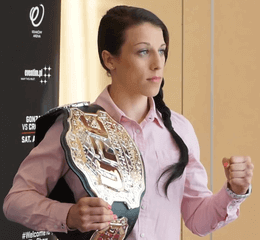 Jedrezjczyk is a Polish mma female fighter who currently competes in the strawweight and flyweight female division. She is a one time champion of the ufc women’s strawweight championship. She made her MMA debut in 2012 when she won her first fight against Sylwia Juskiewicz and followed it up with several victories, including a memorable outburst against former No.1 WMMA flyweight champion Julia Berezikova.

Jedrzejczyk fought a total of 20 MMA and won 16 of them. She is the first UFC Polish champion and the first European UFC Champion woman. Jedrzejczyk was named Female Fighter of the Year in 2015. 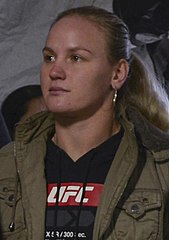 The Kyrgyzstani-born mixed martial artist competes in the UFC women’s flyweight division and is a current champion. Between 2003 and 2015, she won more than 50 match combats, both amateur and professional. She has eight gold medals named after her at the IFMA World Championship. Shevchenko fought in a total of 22 full matches in MMA and won 19, by mostly submission. She is widely regarded as one of the world’s leading women MMA fighters and ranks third in the UFC women’s pound-for-pound rankings. 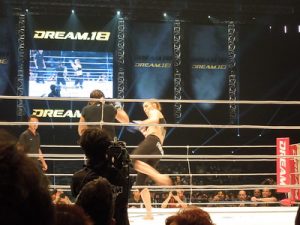 “Marloes Coenen (@MarloesCoenen) vs Fiona Muxlow” by nipotan is licensed under CC BY-NC-SA 2.0

Coenen made her MMA debut in 2000 and recorded eight straight fights and won the 2000 ReMix World Cup. The victory halted her presence in MMA sports as she became the first female MMA champion. In 2010 she won the Strikeforce Women’s Bantamweight Champion title, although she lost the title the following year. She has fought a total of 31 MMAs and won 23 of them in eight defeats. She  won mostly by submissions.

She is currently fights in the women’s strawweight division of the Ultimate Fighting Championship and was ranked 6th in its ranks. Fan Favorite Fighter of the Year 2013 fought in 22 total fights and won 18 of them, winning the most by submissions. She is the youngest black BJJ belt holder. 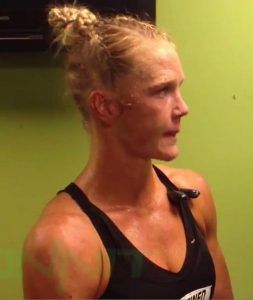 Holly Holm is the first and only fighter with a world boxing title and a UFC title. Before appearing in MMA, She had a successful career in boxing, became a world champion boxer many times and successfully defended championships. Her mastery in the boxing ring was impressive; has been hailed as the most outstanding female boxer ever produced by BoxRec.

Holly Holm record one of the biggest fight in UFC history when she defeated Ronda Rousey in her first loss in the sport and became a bantamweight champion. A record of 56,215 people in Melbourne saw that great fight. She has fought 18 MMA and won 13, mostly in knockouts. She ranks No. 2 in the Ufc women’s bantamweight rankings.

A native of Brazil, Vanessa Porto competes heavily in the Invicta Fighting Championship flyweight division and has recorded a carved a fearsome reputation in the cage. In the early stages of her career, she initially fought for a Brazilian promotion but debuted in the Invicta Championship in 2012. Porto has fought a total of 30 battles and won 22 of them mainly by submissions. She currently ranks No. 2 among 125-pound MMA fighters worldwide.

After a successful amateur career in which she did not record a loss, Namajunas made her professional MMA debut at Invicta FC, which saw her emerge victoriously. Shee lost the UFC Strawweight Championship title to Carla Esparza in 2014.

After several defeats, her career took a turn for the worse in 2017 when she drew a memorable outburst in UFC history by defeating undefeated champion Joanna Jędrzejczyk to become the new UFC Women’s Strawweight Champion. He successfully defended the title in a battle against Jędrzejczyk.

Although she lost the title in May 2019, she won it again in a rematch on July 12, 2020. Rose Namajunas fought in a total of 14 career fights and won 10. She is currently ranking No. 4 in women’s pound-for-pound rankings and also No. 1 in the UFC strawweight rankings. 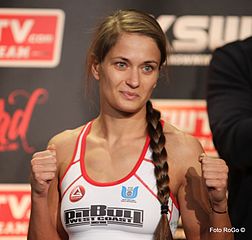 A native of Poland, she joined the UFC team after a brief stint at the promotion of KSW in her country. She recorded a victory in her first UFC fight and the next two started a title fight with former champion Joanna Jędrzejczyk. The loss, however, did not stop her from fighting. She went on to record many points of victory and loss in her subsequent fights. The former KSW women’s flyweight champion fought a total of 18 fights and won 12.

Zingano is an American mma fighter and one of the best in the cage. She was the first woman to record a victory in the UFC battle by knocking on technical knockout. She is also the first woman to be awarded the UFC “Fight of the Night” award. Shee fought 14 battles in total, winning 10, 5 of which were knockouts. When she left the UFC, she placed 7th in the UFC Bantamweight list. Currently, she is doing her MMA career with Bellator MMA.

Julianna Pena is one of the best in the mma world. She had made her debut in 2009 and recorded four straight wins before her first loss. Pena was the first female MMA player to win “The Ultimate Fight” and once won “Performance of the Night.” In all of her career, she has fought a total of 12 fights and won 9. MMA 2020 stats placed fourth in the UFC women’s Bantamweight ranking and 14th in the women’s pound-pound. She is currently competing in the UFC women’s flyweight event. 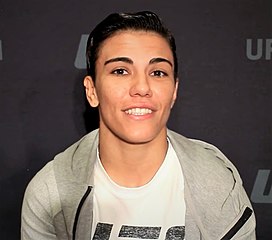 The Brazilian mixed martial artist currently competes in the Ultimate Fighting Championship comes out 15th in the list. She is a one holder of the UFC Women’s Strawweight Champion titles. So far, in the nine years of her career, she has fought in 28 fights and won 20 of them, most of them by submission and knockouts. She ranks second on the UFC Strawweight women’s list and 6th in the UFC women’s pound-pound.

Tate uses wrestling, boxing, Muay Thai, and Brazilian jiu-jitsu to punish her opponents. With a reach of 65 inch and 130lbs of pure muscle, Tate is not afraid to enter the ring with anyone. Despite losing to Ronda Rousey at UFC 168, Tate put together a commendable job by defeating the likes of Holly Holm – taking the bantamweight title – Jessica Eye, and Liz Carmouche making her one of the strongest mma female fighters. 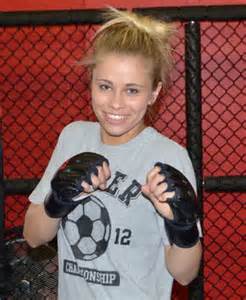 “Gauge” is one of the best mma female fighters in the sports, using high defensive skills and punishing Brazilian Jiu-Jitsu to win her fights. Hailing from Dundee, Oregon, she has a reach of 65 inches and is a fierce grappler in the ring, using elbows, ground strikes, clinics and quick punches to gain upper hand. Even though she is young – she started her MMA career at just 18 – VanZant was very impressive, starting seven wins in his first nine mma fights.